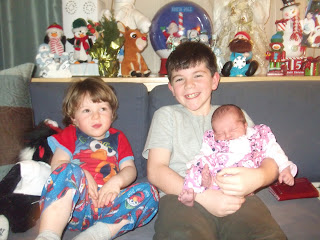 To My Liam, Quinn and Avarose,


Avarose was very sick this weekend, the most sick she had ever been so far in her young life. We had big plans to go pumpkin picking out east at Grandma's, but Avarose and I had to stay home. So as not to disappoint my little princes, Grandma and Papa picked you guys up, along with your Aunt Tara and your cousin Jack and off you guys went.

There had been a large corn maze that Liam and I had gone in the year before, so Liam, Aunt Tara and Jack decided to try it out this year.  Quinn stayed in the pumpkin patch with his grandparents.

Now Liam you have always been very precocious, very wise beyond your years.  Not realizing that they change the layout of the cornmaze every year, you insisted you knew the way out. After awhile of running through the maze with your aunt and cousin in tow, you realized that you didn't know the way out. Always the thinker, you had taken a lot of snack size kitkats from Grandma's house. You told your aunt that you would use them to map out your route, the wrappers acting as flags that you had already been down this path once before. You proudly told your aunt that the kitkats would also do double duty as dinner if you guys never found your way out at all and were forced to spend the night in the maze.

It was this story that gave me the idea to start this blog. We have had so many adventures, done so many wonderful things. Of course I have pictures, but what about the story behind the photograph? What about Liam's funny way of looking at things or Quinnie's loving, sweet words when you really need it the most? I had to record these happenings before they were gone. So this is the place, the spot where I will record the everyday wonderful that goes on in this house.

Today is October 9th, 2012. You guys are 9, 3 and 10 months old. Your childhood is flying by and I have this sense of urgency to freeze time. Liam, you always look at me like I am crazy when I say that, but it isn't something you can understand until you are older. I remember when I was a kid, I always thought I forgot how to read and write over summer break, that is how long it seemed to me. Now, everything happens so fast. You are nine for God's sake! How did that happen? Just yesterday I had just delivered you into this world. You were this tiny, delicious little being with the biggest blue eyes that stared up at me with nothing but unconditional love. Now you are playing football and making me kiss you goodbye in the morning while we are still in the house because "it's so embarrassing when you do it at the drop off spot". Where did those nine years go? Where is that beautiful baby boy that needed me for everything?  I know he is still in there somewhere. He visits when he is sick or if he has had an especially bad day, but as you get older and more independent, he visits me less and less.

This blog is dedicated to you three loves.  Soon enough you guys will be all grown up. Maybe you will be mad at me because I am a very strict mom compared to the moms of your friends. Maybe you will think of me as terribly uncool. When that time comes, I will direct you to these pages, where nothing but the love and the good times are recorded. Just in case you forget how good they were, it is all here in black and white, an outpouring of a lifetime of love that your Dad and I gave to you, so that you never forget, as uncool as I am, I love you to the moon and back.

P.S.  I am totally cool and badass, but you won't realize that until later either
Posted by Compulsively Disorganized at 5:36 PM